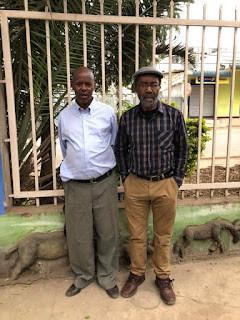 I am happy to introduce Thomas Ratsim, a friend of mine who lives in Arusha, Tanzania. He and I first met by pure chance in 2006, as I was wandering around Arusha with Professor Jon Watkins of Colorado College, working on logistics for a course on Hemingway in East Africa that I had proposed for that college.

We were delighted to meet Thomas and to learn that he was the program manager for a tour company and was experienced in hosting Americans. Jon and I took him on board, and the rest is history.

For many years, Thomas has been guiding visitors to Tanzania, especially Americans. We became close friends and collaborators since we are both passionate about showing foreigners our beloved country, my specialization being study abroad programs run by American colleges and universities in partnership with Tanzania and other African countries.

Thomas and I like reading books, and we share a particular interest in Ernest Hemingway, especially his East African writings. Here in the USA, Americans returning from Tanzania sometimes contact me, raving about Thomas and telling me that he told them about me and my book, Africans and Americans: Embracing Cultural Differences.

I am honoured and grateful to have such a friend, who is highly regarded by visitors to Tanzania. We took the photo above on August 26, 2018 in Arusha.
Posted by Mbele at 5:48 PM