Mwana: A Collection of Poems 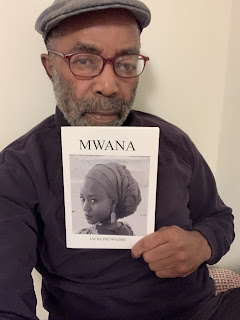 Mwana is a collection of poems by Jackline Waziri, a budding UK based Tanzanian poet. She happens to be a great granddaughter of Shaaban Robert, the most famous Swahili writer.

Away from her ancestral homeland, Jackline brings up images of village life as well as some references to cities, notably Tanga and Dar es Salaam. The serenity of the village comes through, though in realistic rather than idyllic terms.

The earth is a recurring theme as the ultimate anchor of human identity and being--authentic being. Humans gain from staying connected with it. This notion comes out clearly in the poem titled "Children of the Village," which describes village children

as they wandered, bare feet
leaving no footprints,
they touched earth.

Normally, we think of bare feet as signifying a lack, but Jackline sees how bare feet touch the earth. They thereby make the desired, natural connection between the human being and the earth. By implication, shoes are a barrier, representing our alienation from the earth.

Certain parts of Mwana touched me in a particular way, such as this description of a woman in the poem "Tanga,"

It was that mama,
with her scarf
folded round and round,
laid on her head
and the bowl of fruits sitting peacefully on top of it.
And her bundle of joy,
sweetly wrapped
under the colourful
kanga on her back.

The language is simple, and the description vivid, like a painting, if I may refer to the notion of painting with words, which I learned from the great poet Derek Walcott.

Mwana takes us across a landscape of memories and reflections about identity, the idea of home and belonging, tinged with nostalgia. Jackline is a promising poet with a great future.

Thanks, Freddy Macha. Indeed, "Mwana" deserves a review congruent with its delicate economy of words.

Love this! Amazing review for an equally amazing poet… I have enjoyed reading both!

I love this,this is wonderful,God bless you Sir,I so much love this review

Thank you, Joyce Materego. I am glad you like both the poem and my review. I wanted to do at least a semblance of justice to "Mwana," and I hope to write more about it.

Thank you, Ezra Alagbada King, for your remarks and good wishes. God bless you too.