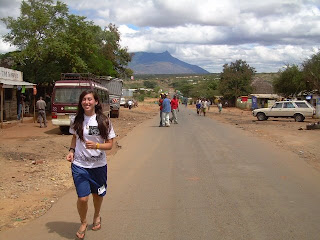 Here is Namanga, a town straddling the border between Kenya and Tanzania. As you pass the gate and enter Tanzania, you see a mountain in the distance. That is Longido mountain. At the foot of it, on the other side, lies the little town of Longido. I have crossed this border many times, over the years, on my way to and from Kenya. I have visited it with groups of American students, such as the one seen jogging above. 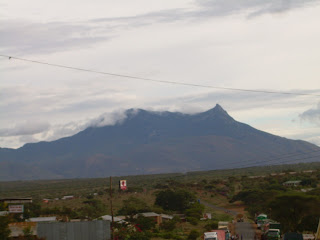 Mount Longido is one of the many volcanic features in Tanzania. Its name comes from the Maasai word "oloonkito," which means the place of the stone for sharpening knives. Indeed, Longido mountain abounds with rocks, including the kind the Maasai use for sharpening knives. Longido has also some memorable history. For example, on November 4, 1914, during World War I, a British force coming in from Namanga attacked the Germans at Longido. The Germans defeated the British. 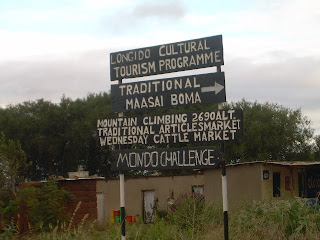 Small as it is, Longido is now the seat of the district of Longido, with schools and other facilities. It is also the center of a vibrant cultural tourism program, known around the world. 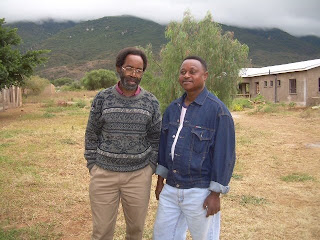 I have taken students to Longido as part of a course on Hemingway in East Africa. I have found the Longido Cultural Tourism program a wonderful way to introduce my students to Maasai culture. Under Ally Ahmadou, its director, this program is run by the local Maasai, for the benefit of their community. As you go around the town and its vicinity, you get the distinct feeling that the local people support the program and they talk about its significant benefits in their community, including schools and water projects. 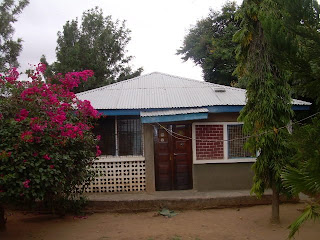 Above is the guest house owned by the Longido Cultural Tourism program. 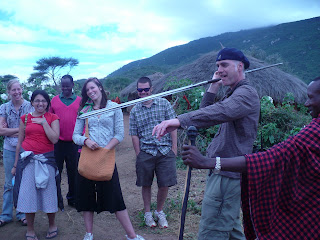 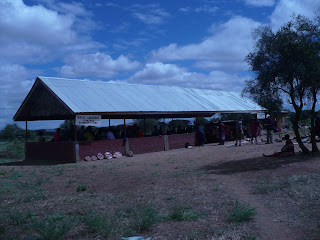 This is the Maasai women's market on the edge of Longido town. Here the women sell different products they make, from bracelets to utensils. 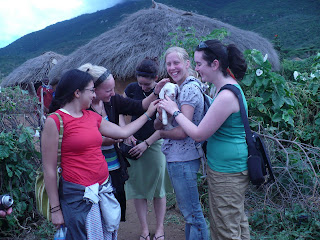 Students from Colorado College admire a lamb during a visit to a Maasai boma, May 2008. 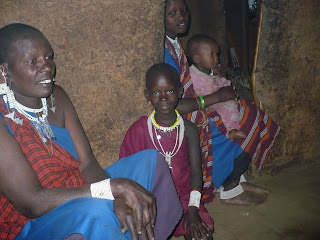 Here are Maasai women and children in their home. The Maasai of Longido welcome visitors into their homes, eager to teach them about their lives and culture. I have enjoyed all my visits to this community. 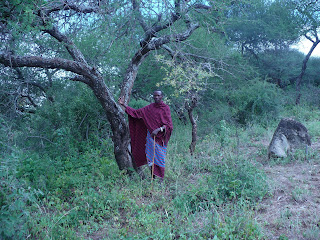 A Maasai guide explains to my Colorado College group the uses of a particular tree, on our way to the Longido mountain, May 2008. 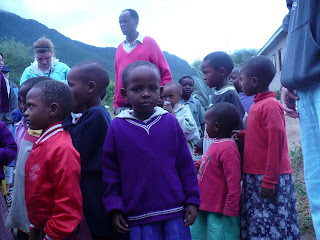 The Longido Maasai school children are used to visitors. Their parents want them to go to school and are happy that their cultural tourism program is making this possible. 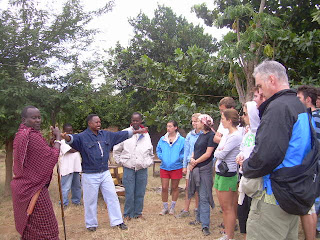 Mr. Ahmadou gives a briefing to our Colorado College group, before our trek up the Longido mountain, May 2007. 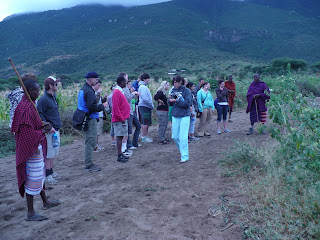 Our guides explaining the uses of various medicinal plants, on our way to the Longido mountain, May 2008. 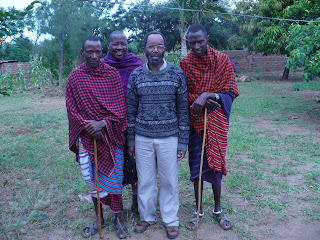 Here I am with our guides, May 2008. I am lucky to have these friends and to be learning much about their culture. Interacting with the Maasai not only frees me from misconceptions about the Maasai, which are rampant among non-Maasai people, whether in Tanzania or elsewhere, but also gives me a sense of what Hemingway is describing in his works, especially Green Hills of Africa and Under Kilimanjaro. 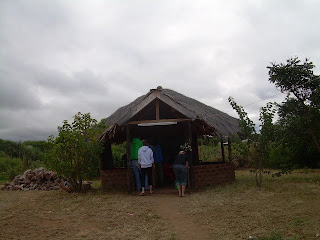 Above is the dining hall, close to the guest house. 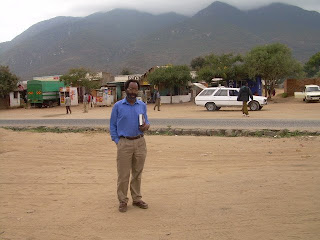 It is very nice to be here in the center of Longido, beside the highway linking Tanzania and Kenya. It is wonderful, knowing that on December 20, 1933, Hemingway and his party passed here, on their way to Arusha and beyond. I have learned something else this year, while reading a book I bought last year, Barua za Shaaban Robert 1931-1958, published by the Institute of Kiswahili Research, University of Dar es Salaam. This is a collection of letters Shaaban Robert, Tanzania's most famous writer, wrote to Yusuf Ulenge, his younger brother, over a period of a quarter century. I knew for many years that Shaaban Robert had lived and worked in different parts of Tanzania. However, now I have noted with much excitement that Shaaban Robert stayed here in Longido, in September 1931, working in the Customs Office. He came again the first week of June, 1936, to work in the same office. This time, he intended to stay 56 days. As it turned out, however, he stayed over a year, up to about mid-July 1937. Unfortunately, most people are not aware of this vital connection between Longido and Shaaban Robert, the founding father of modern Swahili literature.

Thank you for educating us on so much history. It is unfortunate that many Tanzanians do not access the internet. Had they done so, I am sure they would have found your postings as educating and fascinating as I find them. All the best and Keep it Up!

I really enjoyed this post. Thank you Prof. Mbele for sharing this information with us.

Wow! What else can i say? Reading this is very nice and refreshing. You're our LIVING AND WORKING GOOD AMBASSADOR.
Thank you so much and may stay BLESSED

My curiosity grew through all these experiences, and that is how I began learning about these places. In addition to talking to people there, I have been reading historical and other writings. Sometimes, I stumble upon unexpected connections, as happened when I was reading the Shaaban Robert book.

Persistence in studying about our country will enable us to generate valuable knowledge, for ourselves, for the world, and for posterity.

My research around Tanzania yields such knowledge. I am happy to learn all the time, so that I can be a resource for others. That is my mission and my dream.

One year ago today I went to Longido to teach English in the Primary School and in the Boma School. I spent a glorious 3 months becoming part of this wonderful community. The Maasai are a wonderful people with warm hearts and generous natures. The work that Mr. Ally does with the cultural tourism programme is wonderful and invaluable to the local community. Unfortunately the global recession has caused a fall in visitor numbers to Longido over the past 2 years but I highly recommend a visit to this vibrant village; if you are travelling between Nairobi and Arusha it provides a perfect place for a stop over.

Thank you, Eleanor, for your comments. I have noted here, and on your blog, how much you love Longido. For me as a Tanzanian, that is truly touching. Do visit again, and again, if you can.

Thanks, David for sharing your experiences. I am looking forward to going to Longido again, early next year. Yes, it is a lovely little place, a wonderful community.