My First Book in Swahili

The year 2009 will remain special in my life as a writer. I published my first book in Swahili, a collection of articles I wrote for a Tanzanian weekly newspaper. 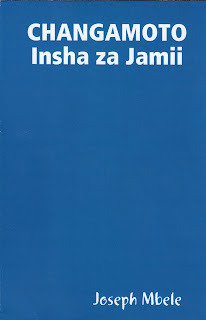 I accepted the invitation to write these articles with some trepidation, even though I found the challenge alluring. I did not have the experience of sustained writing in Swahili. I knew that I had to discipline myself and write in formal Swahili, devoid of code switching.

To sharpen my Swahili and build my confidence, I read the writings of Shaaban Robert, the doyen of Swahili writing in our era. I read his Maisha Yangu na Baada ya Miaka Hamsini, Adili na Nduguze, and Kusadikika, all available from Mkuki na Nyota Publishers.

The choice of topics was entirely mine. I wrote about political, economic, educational and cultural issues pertaining to Tanzania, with constant references to the differences between Tanzanian and American realities.

Now Changamoto is out, in both printed and e-book formats. To call it a labour of love would be somewhat disingenuous and an understatement. Semantics aside, the experience of writing has been both purgatorial and humbling.

I rarely read my own publications. I prefer to be writing something else. However, even though this little book is far more modest than my other writings, I return to it again and again, reading parts of it, hearing my own voice, still wondering how I managed to write a book in Swahili.
Posted by Mbele at 8:46 AM

Thanks, Dada Subi. Reading your articles, I have a sense that if you eventually produce a book, it will be more significant than this little book of mine. Just keep writing.

I don't know if you have some telepathic powers or what but it's in my plan, when due, I am going to seek for a help from you - a book pro - it's about time I wrote one and stop postponing. Now if I could, for once, have a break from procrastination, I'd congratulate myself. Thanks for the encouragement. Will do something needful to me and those who love reading what I write.

See, you guessed right. I do have telepathic powers :-)

But, seriously, I will very gladly share with you all I know about the publishing of books and its aftermath.

Hongera kwa kitabu. I so do hope our schools will be able to buy it in masses. The general Tanzanian public? It would be nice if you advertise it katika vyombo vya habari nchini, kwani it looks like an essential read to the Tanzanian community.

However, as I have said again and again, Tanzanians make many excuses for not buying and reading books.

They will say, for example, that books are too expensive and they cannot afford them. This, of course, is not true. Every week, Tanzanians spend huge sums of money on beer and celebrations. Every day, beer sales are staggeringly high.

In the past, since I have written most of my works in English, some Tanzanians have complained that there is a language barrier. Now I have written this book in Swahili.

Of course, the Tanzanians will complain about the price of the book, even while ordering another round of beers.

Someday, I will translate this book into English, if only for the sake of non-Tanzanians.

Prof.
Congratulations on your new book.I have always loved reading what you write.The Africans and Americans is among my favorite books and a point of unending reference.

It is also an honor to hear that among the published materials in your book is an interview I did with you.Thank you

Thanks for your message. I was, in fact, planning to send you a message that I have included that interview, with due acknowledgment right at the beginning of the book.

I know how much you like my "Africans and Americans" book, and I really value your opinion.