African Americans We Met at Afrifest 2015 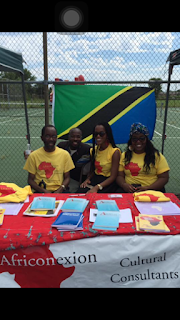 I want to continue sharing my memories of Afrifest 2015, which was held yesterday at Northview Junior High School in Brooklyn Park, Minnesota. As I mentioned on this blog, stories of that festival will continue to be told, and I want to focus on one aspect: encounters with African Americans.

I was at the festival as an educator, writer, and cultural consultant, with two of my daughters--Assumpta and Zawadi. Several African Americans came to our table and we had a chance to chat with them.

The first to come, soon after the festival started, was a gentleman who appeared to be of my age. As soon as we had greeted each other, he looked at my books and asked if I knew Professor Mahmoud el Kati.

Incidentally, I have known Professor Mahmoud el Kati for almost a decade. He and I have met at events involving Africans and African Americans, and have even featured on panels at such gatherings. This visitor to our table recalled having met me at one such events. He summoned his wife who was standing nearby, and she joined us, as a witness to our conversation, which revolved around Professor el Kati and the events I have alluded to.

At some point during the festival, three young black ladies came to our table, and we immediately got into a lively conversation. With obvious delight, they told us they were traveling to Accra. I could tell, from their accents that they were African American, and when I asked where they were from, they affirmed they were African American. They had not been to Africa before, and they were excited about their forthcoming trip. I told them how Americans who have been to Ghana rave about it, as do those who have been to Senegal, another West African country.

I seized the opportunity, however, to entice them, partly in jest, but also sincerely, with the idea that their next destination should be Tanzania. I also told them what I tell every American traveling to Africa how touched and pleased I am that they are going to my continent, to see and experience it for themselves. I wished them well and they moved on, exploring the exhibits.

Later, out of the blue, we saw a beaming Adrian, an African American friend of mine, coming to our table. As soon as we saw each other, we started waving and shouting our greetings. He and I have known each other for years, and my daughters know him from last year's Afrifest. He and I have some common interests in community engagement to promote Pan African education and solidarity. He is a great fan of my writings. Needless to say, our meeting yesterday was a major highlight of the festival for both of us. We made sure to take the photo seen above.

I have written about these encounters with African Americans because they exemplify the dream of Afrifest, which is to connect Africans and the African Diaspora in order to pursue common goals, such as self enlightenment on historical, socio-political and cultural matters. Despite its Afrocentric name, however, Afrifest embraces the human family.
Posted by Mbele at 5:01 PM