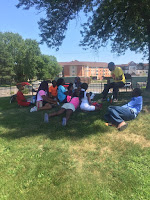 On August 2, 2015, during Afrifest 2015 in Brooklyn Park, Minnesota, I performed African folktales as part of the festival program.  I chose two tales--"Hawk and Crow" and "The Monster in the Rice Field"--from my book Matengo Folktales. The photo on the left shows me as I was impersonating the monster in the second tale, who was snatching away members of a family, one after the other, as they were out in the field, away from home, watching over their rice.

Neither of the tales has a happy ending. The first ends in a bloody fight between Hawk and Crow in which Crow is killed. In the second tale, the monster takes away the entire family. With the disappearance of each member of the family, the tale builds suspense, the audience wondering with increasing anticipation what is going to happen next. The last member of the family is taken away by the monster, and that is the end of the tale.

When I declared to my Afrifest 2015 audience that the tale was over, I knew what to expect. There was spontaneous laughter mixed with disbelief and puzzlement, and at least one person exclaimed, "We want a happy ending!" I had told tales from Matengo Folktales to audiences across the United States and, again and again, the endings left the audiences puzzled or incredulous.

There is a general expectation in American society that tales should have a happy ending, as is underlined by the famous sentence, "And they lived happily thereafter." This expectation is related to the idea of the pursuit of happiness which is deeply ingrained in  the minds of Americans.

African folktales tend to emphasize that life consists of ups and downs, that it is a mixture of joy and sadness, good luck and misfortune, success and failure. In life, good is not always rewarded and evil is not always punished. This is not an anomaly in African cultures. Traditionally, African youths were brought up to face challenges and be brave, through practices such as initiation rites, which were difficult, to say the least, meant to prepare boys and girls for the responsibilities of adulthood, marriage and parenthood.

I was not surprised at Afrifest 2015 that people expected happy endings. I felt they have succumbed to the American fantasy of the pursuit of happiness. But I have to honour the African storytelling tradition. There are certain changes a storyteller can make in the telling of tales, and some changes are inevitable, because performers don't usually memorize a text or read from a book. In a way, they create in performance. Nevertheless, there are core aspects of the tale that must be kept intact.

As we explore different folktale traditions and the cultures they spring from or operate in, we will encounter surprising and even shocking aspects. Researchers have noted this from the earliest days of the tradition of recording folktales, exemplified by the German brothers Wilhelm and Jacob Grimm since the early years of the nineteenth century. With the passing of time and the rise of such influences as Disney films, there have evolved expectations about folktales such as I have described, including happy endings.
Posted by Mbele at 7:56 PM